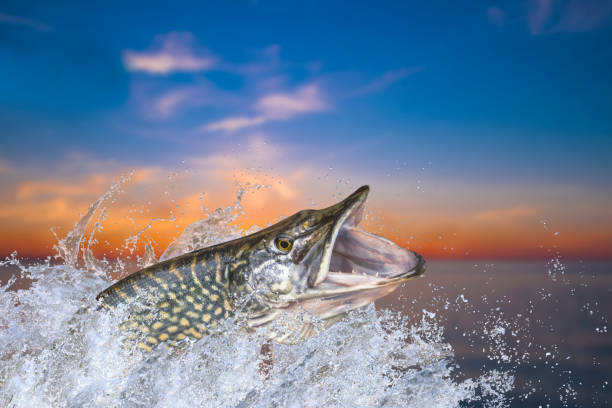 Catching a large muskie has been on the bucket list of many fishermen. But did you know that the length of a large muskie can also tell you a thing or two about how old the muskie is? In this blog post I researched how old muskies can live, how they are born, what threats muskie face and how to handle an old muskie when caught.

How old can a muskie live?

The average lifespan of a muskie is 18 years old, but muskies up to 30 years of age have been recorded. The length of muskie can say a lot about the age. It reaches a body length of 11 inches after their first year of life.  By age of 7 they reach 34”, 40” by age 9 and 50 inches by age 17.

Fascinating, right? Keep reading to learn more on the life cycle and how to properly handle a large and elderly musky when you catch one!

How is a muskie born?

According to the Wisconsin Department of Natural Resources, the muskies will spawn when the water temperature rises to 60 F. This happens mostly in from mid-April to late May. Both males and female muskies will seek out warmer and murky waters to perform their mating rituals.

Did you know that a female muskie can lay between 20,000 and 200,000 eggs a year? Why the large spread? This depends on the size of the female musky. The larger the specimen, the more eggs she will produce.

After about a week both males and females leave the mating grounds. Those baby muskies will be all on their own from that moment. Ouch, talking about tough parenting!

I am sure you can imagine what happens with the newly hatched muskies. Well, after being abended by their parents they will most likely be eaten by other predator fish like northern pike, perch, bass and sunfish.

The ones that do survive will reach a body length of 7 to 12 inches by the end of the summer.

How is the age determined?

The age of a musky can be determined by using two methods. The first one is by using the cleithrum (a membrane bone which first appears as part of the skeleton in primitive bony fish, where it runs vertically along the scapula) a calcified structure that requires lethal sampling and is collected from harvested fish anglers bring into taxidermy shops.

The second one is an estimation by length. I will explain more about this in the next chapter.

How fast does a muskie grow into adulthood?

On average, musky are about 11 inches long after their first year of life, reach 34” in year 7, reach 40” in year 9, and reach 50 inches by age 17. As you can see most growing happens withing the first five years of their life.

Males mature in four to five years, at 28 to 31 inches and females mature in five to seven years, at 30 to 36 inches. Same as with northern pike, the female muskies do grow faster than males.

Growth and ultimate size can vary among bodies of water, depending on factors such as lake productivity, forage and genetics.

What threats impact the lifespan of a muskie?

As mentioned in the previous chapter, young muskies face a variety of threats but what about adult muskies? Adult muskies have no aquatic predators besides other (larger) muskies, but can fall victim to disease, large bird of prey like eagles and of course their number one threat: humans.

How do I handle older muskies?

As mentioned before, us humans have a large contributing factor to the well-being and survival of muskies in the wild. Large trophy muskies are also older animals, and we have to help them to reach the proper age.  In order to do so you will have to use a “catch and release” approach.

Once you have hooked an older muskie make sure you use a proper sized fishing net that has a rubber coating. Once the animal is caught in your next you can either decide to unhook it quickly next to the boat by using long-nosed pliers.

Leave the fish in the net whilst you prepare to get everything ready for your photo opportunity and once you are finished make sure the muskie is placed safely back into the water.

Give the animal an sufficient amount of time to “catch its breath” by genteelly holding on to its tail and use forward and backwards motion to get the water running through the gills. Once you fill the fishing regain its energy, gently release the tail and see that beauty swim off into the deep waters.