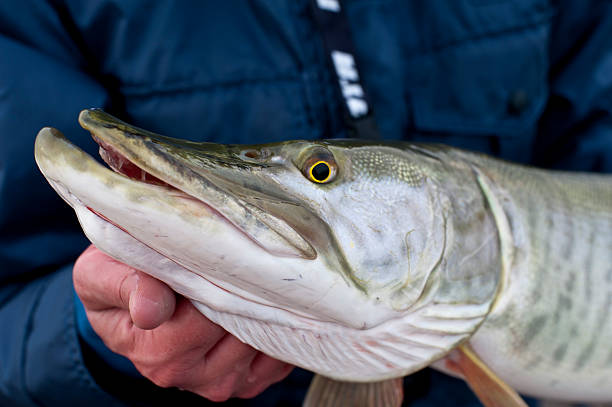 Muskies are among the trickiest fish to hook, so you certainly aren’t the first to wonder if you could catch a muskie at night — when the waters are quieter and wind speeds dwindle. Nighttime, indeed, offers a decent opportunity to hook yourself a muskie, but there are important caveats. In this brief guide, I’ll take a closer look at the optimal conditions for catching muskies at night.

Can You Catch a Muskie at Night?

Yes, you can catch muskies at night.  At night these highly-visual hunters scour shallower waters in search for vulnerable prey. By focusing on catching muskies at night, you will have the added advantage of decreased competition of other anglers, meaning that when the midnight hunt of the muskie starts, you have a strong chance of being the first to get them. Keep in mind that muskies reach peak activity within their preferred environmental temperature range of 33 to 78° Fahrenheit.

To make your catch at night, you will undoubtedly need a healthy dose of patience — but insider insights into muskie behavior will boost your odds of success. Keep reading to arm yourself with the knowledge you need to catch yourself a muskie at night.

How to Boost Your Odds of Catching a Muskie at Night

Pay Attention to the Lunar Cycle

Fascinatingly, a research study published in the journal PLOS ONE that analyzed catch records for over 300,000 muskies uncovered that the lunar cycle influences muskie behavior so heavily that night fishers have, on average, a five percent increased chance of catching muskies at night during full moons than on other days. New moons were also associated with higher levels of nightly muskie activity, making them an excellent time to go fishing for muskies at night too, but a full moon will afford greater visibility.

The lunar cycle appears to have the strongest effect on muskie activity at the height of summer, and the study additionally found that larger muskies are more likely than smaller ones to be feeding at night — and let’s be honest, that’s just the kind of muskie you were after, right?

What Is the Best Season to Catch a Muskie at Night?

Muskies can be caught year-round. Spring, summer, and even winter — if you’re up for a long wait — can all be productive times to catch muskies. The fall represents, however, the most abundant muskie season.

This is when muskies are scrambling for food to set themselves up for the winter, and have no choice but to venture out so that you can reel them in. You can take advantage of prime muskie season whether you fish during the day or at night.

What weather is best for catching muskies at night?

Because muskies retreat to deeper waters on hot and sunny days, while becoming more adventurous and exploring shallow waters at on shady days, you will probably have heard that overcast days offer the optimal opportunity to catch a musky. Nighttime itself has a similar effect, with muskies being eager to hunt for prey closer to the shore. Indeed, this is one of the reasons that nightly fishing can lead to great things.

Rain still represents a hustle and bustle of all sorts of fish activity, on the other hand, and muskies who want in on the action are going to be out looking for food while it rains and just prior to rainfall. The period immediately following rain forces muskies to rest, however, and you are less likely to successfully hook muskies in those weather conditions.

Where should you look for muskies at night?

If you’re not sure where to catch a muskie at night, one tip would be to pay attention to the most popular spots used for muskie fishing during the day. You may not be able to get anywhere near them during muskie fishing “rush hour”, but at night, those places can be all yours.

What equipment do you need to catch a muskie at night?

To have any chance of successfully catching a muskie at night, you will near quality gear that — besides your boat — includes:

Because muskies rely on their sight a great deal when they hunt, you will have to go the extra mile to gain their attention in the dark. Generally, this is achieved by spin fishing with big, loud, and colorful lures like muskie spinnerbaits — such as the expert favorite Musky Double Cowgirl Bait — and poppers.

Another thing you cannot skip when you have your heart set on catching a muskie at night is bright lighting to guide muskies to your lure. You can use your boat lighting, of course, but a headlamp will give you more targeted visibility. This way, you will be able to simultaneously spot the approaching muskies and perfect your figure eights to get them where you want them in the first place.

Can you catch a muskie at night? You bet! With good gear, know-how, and a high tolerance for waiting, that trophy muskie will be yours. Good luck!