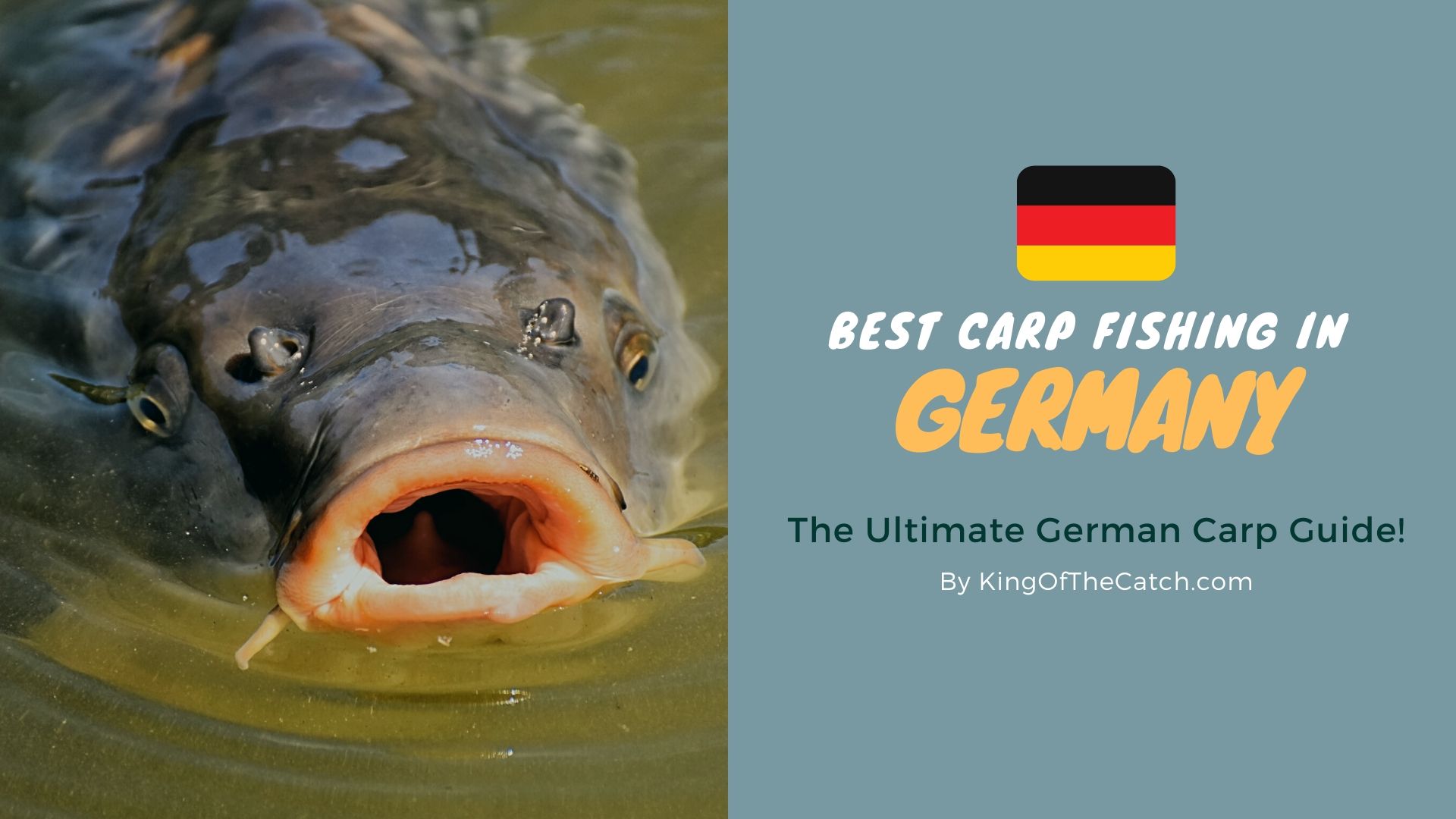 Carpers in the know can tell you that Germany has thousands of lakes hidden away in forests where not many anglers have reached. It is a prime carp fishing location with regular 50, 60 and even 70-pound carps being caught regularly.

Apart from its idyllic landscape and serene atmosphere, Germany is a very attractive spot because of the ease of transport. You can jet in from anywhere in the world, or drive to and from France as well as other close neighbors.

There are tons of fishing companies willing to take you carp fishing in Germany for a fair price, and I will share with you what I found to be the best carping locations.

First, however, let me tell you about the regulations there.

Most places in Germany require that you have two fishing licenses. These are the fishing rod license (Fischereischein) and a fishing permit. Fishing is regulated on a regional basis by fishing associations in every region, called Landesfischereiverbände.

Each region or federal state has one or more of these, and regulations can differ between the states. However, one that is common to almost all of them is that you are required to pass a sport fishing exam (Sportfisherprüfung) before being granted the license.

You need to take 30-40 supervised lessons before sitting for the exam, of which the exam can take place once or twice a year. So before you travel, get in touch with a fishing club (Angelverein) who will arrange for your lessons and exam.

The lessons and exam generally cover:

Some states such as Brandenburg and Mecklenburg-Vorpommern have however abolished these stringent terms. You will only have to buy a fishing permit from tackle shops.

After getting the license, you can buy the permit from local authorities or tackle shops. The permits are specific to the waters you want to fish, so make sure to choose wisely before buying one.

The permits have information regarding the following:

As you can see, the Germans take their fishing resources very seriously. However, lots of states are relaxing some of the outdated regulations so that more tourists can visit. You should take advantage of such states so that you too can enjoy fishing in these glorious places I will tell you about.

I received a good question from a reader regarding the above test and being a foreigner.

Is it really necessary and why is the test only in German?

Good question! I did some more research, called a few German friends and found the following information. You can obtain a fishing license (12,50 euro) without passing an exam. This is only applicable for foreigners and with the exception of the federal state Bremen and Hamburg.

Keep in mind that you still need to translate the website (I recommend Google translate) and maybe use a translator when making a phone call. I must say that a lot of German’s that work in the tourism sector speak perfect English. 🙂

Carp fishing in German is usually in peak season during the Summer when the fish are most active. However, you can also catch them in other seasons. Various federal states have different laws regarding freshwater fishing seasons.

However, you should know that night fishing is usually allowed here. What may surprise you is that catch-and-release is not permitted in most states. That is due to animal cruelty laws, which stipulate that you should not cause any animal pain without reasonable cause.

But as I said, most states are doing away with such backward laws. The best way to get accurate information is to contact a fishing club. Just make sure you understand the regulations for your area perfectly to avoid trouble.

The area in northern Germany called Mecklenburg Vorpommern is referred fondly as the land of a thousand lakes. Its anglicized name is Mecklenburg-Western Pomerania and is a full state in itself with some of the best carp fishing you have ever seen.

The area boasts Lake Müritz, the largest lake in Germany. It also has others such as the Plauer See and the Fleesensee. Initially, the entire region had been part of a single huge lake until water levels fell drastically.

You can have your pick of the best fishing spots on these lakes, with plenty of hidden bays, forested shores, and boats for fishing. However, be aware that some of them are protected, and much of lake Müritz, for instance, is part of the Müritz national park.

There are many fishing clubs in the area that will help you find the best spots, and they will also get you properly licensed to fish in the right waters. The carp you can expect there are wild and quite large, with many 30 specimens or more.

Located in the Bavaria region is the crown jewel of tourist lakes. Also called the Bavarian Sea, Lake Chiemsee is one of the most important lakes not only for Germany but for other countries like Austria as well.

The lake covers some 20000 acres and has many rivers flowing into it. It is 73m/239ft at its deepest and has some excellent fishing bays and beaches. For those vacationing with family, lake Chiemsee is the best option.

You can expect sandy beaches, world-class accommodation and food, as well as pristine waters. You can hire equipment from any of the clubs or shops in the area. The waters get warm as early as March and are very clear. However, fishing here is strictly regulated so make sure to listen to your guide.

It really would be a crime to not fish the Danube in Germany, given that this is where the great river has its headwaters. The river itself and its tributaries are an untapped haven of huge wild carp.

Carping on the Danube is different from many other areas. For one, the river tends to flow fast in many places, so you have to play your cards right and find the areas where it’s slow enough for carp. It is certainly a challenge, and I personally caught one of my best carps there.

As with many other places, the local fishermen and guides know all the best places. They also know all the little bylaws, so make sure to fish for information first.

Another lake in the Bavaria region and located just 12 miles from Munich, Lake Stamberg is a stunning location for carp fishing in Germany. It is part of the Five Lakes that were once one during the last glacial period.

The lake is second in volume only to Lake Chiemsee, thanks to its depth that reaches 127m/416ft. With the Bavarian Alps in the backdrop, Lake Stamberg is the perfect place to holiday. It is also where Germany’s affluent like to fish and have fun, so why shouldn’t you?

The fishermen in the area will tell you that the carp in the lake are exceptional. Since the lake is protected, they have had time to proliferate and grow. You have a big chance of landing the fish of a lifetime right there.

The ‘Mother Rhine’ is another place where you simply must fish. Many people think that because of the heavy ship and barge traffic on it, it is not suitable for carp fishing.

I have found that in the evening when the traffic settles down, the carp like to come up for some quick feeding. If you get to some out of the way spot with enough bait and a load of patience, you can catch some huge carp.

Plus, Germans don’t mind night fishing. If you’re able to keep up in the night, then you can prove me right on this one.

In the South of Germany is the magical, stunning area known as the Black Forest. Covering over 6000 sq km, it is dotted with so many lakes and rivers that you won’t know where to start or stop.

When I was there, I didn’t even have to purchase a local permit. Fishing in many of the lakes was free, and the lakes are chock full of huge carp. Being largely undisturbed, the fish there are wild and tough fighters.

I will let you in on a little tip; when planning a trip there, search online first and see which town you like best. Then contact a local tackle shop and call in advance to get more information about fishing there.

Many of the lakes are so perfectly preserved that they are clear for many meters. You can just see the fish coming to take the bait, which I found to be fun because I could go for the really big ones.

Germany is largely undiscovered. Most people know the major waterways like the Elbe and the Rhine, but there is so much more to it. If you’re courageous enough to venture into the countryside, you will discover new fishing ground like no one has ever seen before.

While at it, however, remember to stick to the rules. Illegal fishing is considered poaching and could earn you a stint in jail. Plus, animal cruelty is also a criminal offense. Stay alert while carping in Germany, but have fun too.

Ps – Don’t forget to check out my blog post on how to master float fishing for carp!