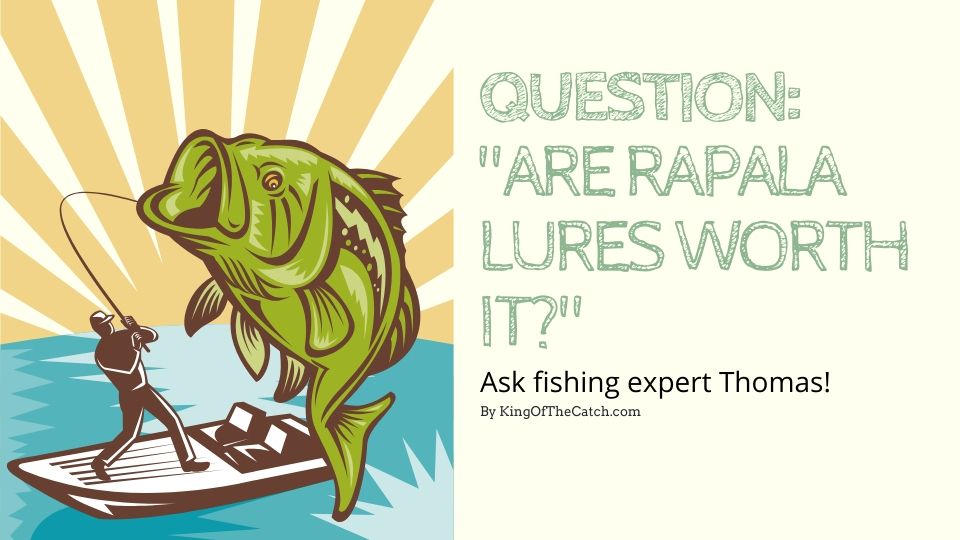 Are you new to the fishing community? Or Are you on the lookout for new lures to shop for? It is always fun to make additions to your collection. There is a multitude of lures out there manufactured by an array of companies.

It can be quite confusing to pick the ones you truly want when there are so many of them.

As a fishing fanatic, I have an adequate amount of information regarding these fancy Rapala lures. Rapala lures are a fad in the fishing community, and I don’t see why.

There are many comments about the Rapala lures and how they tend to make the best fishermen out there. Before you shop for the lures of your choices, I would love to enlighten you with what I know so far.

Are Rapala Lures Worth It?

Question: Hi, I am Scott, 45 from Salt Lake City, Utah, United States, and I have a burning question that I have been meaning to ask the King of the Catch crew. The Rapala lures are expensive and don’t come with the same price tag as most of the lures. I was wondering if they are worth the price? Is there something unique about these lures that sets them apart from the rest? I would really appreciate for you to throw some light on this.

Answer: Hi there, Scott. I will gladly help you by answering your question. I have heard a lot of people talk about this topic, and some fishing buddies of mine have also asked me this question. With so many of these Rapala lures out there with an expensive price tag, I see why you might be hesitating to get one.

Before I get into the details, I would want you to know a little bit about these Rapala lures. They are actually known as balsa lures. The brand of Rapala first created the balsa lure; that is why their name is popularly used for describing the balsa lure. These lures were first created by the use of balsa wood. Typically, these lures measure anywhere from 5cm up to 25cm in length.

Some of them come with built-in rattles. These rattles are utilized for attracting and stimulating the injured fish as well as the sound of workups. Fishes like Giant Trevally, Kingfish, and Tuna and other big species are targeted back in the Pacific Islands and New Zealand with large Rapalas. They are excellent in trolling through works and around the structures of the reef.

Rapala lures possess a front lip and performs two important tasks. It maintains the lure in a position that is upright when it is trolled and cast. It also leads the lure in fluttering and vibrating by imitating a baitfish that is trying to escape or swim away from other larger predator fishes.

The Larger the lip is of the lure, the active and faster the lure will swim. The lips that are traditional go about 1-5 meters in diving down. Some of them come with a lip for special deep diving that allows the lure to go below the surface around 6-10 meters. It is best suited when you are trolling in depths up to 20m+.

I have my own personal experiences with the Rapala lures. You can go through them and decide if it’s actually for you and worth the penny.

First experience with the Rapala Countdown

My first experience with one of these bad boys was the Rapala Countdown. It is, without a doubt, one of my favorites. They are available for purchase in six different sizes. They go from miniature to the maximum size of 4’. It has a sinking lure that is often highlighted as one of its best features. The lure can sink down over 1-foot within a second.

If you are counting down the depth based on seconds, you best-believe that it can be fished at any length of depth. That is how it gets its name. The retrieve of the bait is quite variable. The lure garners benefit and satisfaction from a retrieve that is jerky, straight, erratic, sinkable, and rises. I have utilized over 4-5 countdowns in the past with distinct colors and sizes.

I have used them many streams and lakes and haven’t disappointed me so far. Some of my catches with this lure include northern pike, walleye, black crappie, largemouth, and smallmouth basses, brown trout, mountain trout, freshwater trout, rainbow trout, etc. They have rarely failed to catch for me up till now.

Before you invest in a pricey one, why don’t you first give it a go with the Rapala Countdown 3/16 Oz Fishing Lure? It is pretty simplistic and effective at the same time. It is affordable, as well.

I have also purchased and used the Rapala X-Rap Magnum, which didn’t disappoint me either. They possess an incredibly large diving lip that takes the lure way deep into the water. It has a running depth of up to 15 to 30 ft. What I love about these guys is the fact that they are hand-tuned as well as tank-tested for use. Just like any other Rapala lures, they work perfectly straight out of the box.

What I noticed and love about this lure is the fact that it can run up to a great 13 knots. Once I have used it in trolling for Wahoo with 80lbs of the braid. It dived in with every type of line all based on the kind of fish I was fishing for. It worked perfectly fine for me. It also worked quite well when I used it for the grouper trolling. It does a brilliant job of holding up.

With this bad boy, I have caught species such as bluefin trevally, Dorado, Tunas, barracudas, and a couple of kings. For me, Rapala definitely lives up to its name as a high-profile and superior brand in the fishing community. No wonder they produce over 20 million lures every year.

The X-Rap for me has been all about the “extreme action slash bait” for me. The original X-Rap is, by far, the most effective for me, especially when it is retrieved by utilizing a twitch-pause method. It garners all advantage of the suspending design of the lure.

The Rapala Rap-X Jerkbait 08 Fishing Lure is something you definitely don’t want to miss out on. The lure possesses an aggressive darting and hard cutting action. It has an irresistible rattle and a long-lasting system that is integrated for a classic move and Rapala action. It isn’t overpriced and does the job exceptionally well.

I have also used the Rapala Original Floater that has been in the market for ages now. You might have also heard about it by now. You can recall them by their small size and classic plus bleeding patterns. In all honesty, this one hasn’t been the best for me compared to the rest of the Rapala lures I have used. But it still does a proper job of bringing home a decent catch.

If you want to try the Rapala Original Floater Fishing Lure for yourself, then you can get it now at a low price. You can always use it to see how it performs before you move on to the advanced and expensive ones.

The fishing lures of Rapala are created with meticulous precision. This is the reason behind why they swim perfectly out of the box. Especially after 1936, the fishing lures that they created were finely crafted for durability and consistent success in catching. All of the !Rapalas are hand-tuned as well as tank tested. The company successfully makes over 20 million lures a year and distributes it to over 140 different countries.

A single fact that would answer your question is that most world-record fishes were caught with Rapala lures. So, that says a lot about the company and its lures.

So, I do believe that the money you splurge on a Rapala would be worth every dime. I have personally used and loved it. I really don’t have any complaints or hesitation regarding the brand. Yes, the price can be a little intimidating, but the quality and results make up for me.

So, I suggest you make a go for it and see it for yourself.

4 thoughts on “Rapala lures – Are they worth the hype and value?”