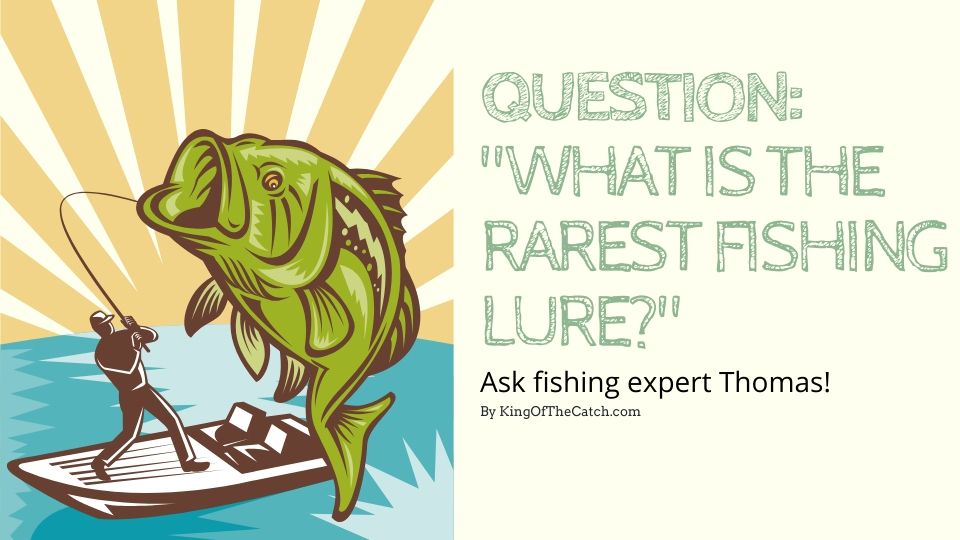 If you have all sorts of these questions popping up in your mind, then you have landed on the right page. In this article, I will take you through all the insights about the rarest fishing lures and hopefully help you choose the right

What Is the Rarest Fishing Lure?

Question: Hello, I am Brad, 30 from Georgia, Atlanta, in the United States, and I have a question. I was interested in knowing about the rarest fishing lure available today. I want to know a little bit about its history and how much they retail for.

Answer: Hi there, Brad. I am Thomas, and I will be delighted to answer your question. A lot of fishing enthusiasts keep asking this question. There are a ton of rare fishing lures present in the market today. Most of these rare lures are sold via auctions.

They are rarely used by the buyer and kept as a collector’s item instead. They are prized possessions and comes with a fat price tag.

Before I get into details, I know for sure that these lures are incredibly expensive and retail for thousands and thousands of dollars. These rare lures are determined by their craftsmanship, the scarcity as well as its beauty.

The lures highlighted below are quite rare and definitely worth a peek.

1853 Giant Copper Haskell Giant Minnow – This lure is regarded as the rarest vintage lure of all time. An auction was conducted in Waterville; New York called the “Lang’s Discovery Auction” back in 2003. It was sold there for about $101,200. Only one of them exists, so I would be automatically blind to the price tag, just like any of us would.

The lure was given the name of “Holy Grail of Fishing Lures.” It measures up to six inches and is made out of copper. It possesses a rotating fin accompanied by two upward hooks attached to its tail. Its size and type make it valuable. Riley Haskell patented the design of the lure in 1859.

But you can also try the TRUSCEND Fishing Lures for an amazing fishing experience. This product is an Amazon bestseller and provides an excellent experience. Its multi-jointed body and mustard hooks will attract predator fishes in no time.

Rare Haskell Musky Minnow – These lures are quite rare and precious. It measures up to 7 ½ inches and is professionally crafted. The fins and scales of the lure are finely detailed to shine. I believe it definitely highlights the true craft of American craftsmanship during the early days.

Comstock Flying Hellgrammite – According to some collectors, this lure is considered to be the first wooden lure to be ever created. It imitates a larvae-stage dobsonfly, which is also known as hellgrammites. It has a wooden body accompanied by copper parts and red beady glass eyeballs.

The first-ever lure design of flying hellgrammite was claimed to be created by Harry Comstock. But there was a time when his rival Pflueger released one by creating his own version. Comstock took them to court and won the battle. I’m glad Comstock won the battle as I would be mad too if someone stole my idea and creation.

Hosmer Mechanical Frog – Frog lures, in general, are quite favored in the fishing community. The different plus unique patterns and shapes of frogs attract both the fisherman and the fishes. But this particular frog bait stands out among the rest. It comes from Dearborn in Michigan.

A bight yellow color is painted on this lure, accompanied by hand-painted spots. It also has a mouth and is preserved in excellent condition. It comes with a paper label as well as for instructions on how to use it. There are very few available, and they usually don’t go up for sale in auctions. The last time it sold was back in 2007 for about $13,000.

Heddon Jeanette Hawley “Mohawk” Minnow – This lure is another rare beauty dating back all the way to 1905. There is only one of them in existence. The lure comes with a wooden box that originated from the location of Mohawk in Florida Heddon. Both the lure and the box are finely crafted and are available in mint condition.

The bait comes with completed paperwork that contains the date as well as the significance of the find. The bait was sold in an auction for over $18,400 back in 2013.

Shakespeare Musky Minnow – This is one of the best Shakespeare fishing lures available today. The bait comes in a wooden box with a sliding top. This lure gives me the “found in the attic of my grandparents’ house” vibes. The one small dusty box that was left unattended under a pile of junks.

The bait and the box are in perfect condition. It comes with a note that says that dozens of these were made and are known to exist. The lure was recently sold in an auction conducted in 2019 for almost $16,000.

If you are a collector of these rare lures, then you can always avail of the Plano Big Game System tackle box for storing these lures. It will make your collectibles appear grand and polished.

Heddon Frog – This antique is another rare and one of the most sought-after lures for fishing.

Heddon is responsible for finding the 1st artificial lure company back in 1902. His company has created numerous wooden lures. But the wooden frog is by far his most sought-after.

The crude lure has a hook on each leg and a large treble hook on its underpart. Only eight of these lures are available today. They are purchasable for a staggering amount of $30,000.

Little Wonder Minnow in Box – This lure was created by the manufacturing company of Clinton Wilt back in Springfield of Missouri. The lure and its box date back all the way to 1910. The item is the only known example of being a complete 2-piece cardboard box for the lure to exist.

Both the box and the lure are shaped to perfection. This specimen is deemed quite rare and is definitely a must-have for any lure collector. The entire item sold for an amount of $18,000 in an auction back in 2019.

Heddon Night Radiant – This lure is regarded as the 2nd rarest Heddon lure. This topwater plug was released by the company back in 1912. However, the lure was never listed in any of their catalogs. This particular lure is available in two variations, i.e., a 5-inch lure accompanied by 4 treble hooks, and the other edition consists of a 4-inch lure accompanied by three treble hooks.

Some of them were white with a black stripe painted at the back, and the rest consisted of plain colors. The Heddon Night Radiant retails for over $10,000.

1905 Wiggletail Smith Minnow – This American minnow is a true classic. The tail mechanism, along with the fin design, makes it unique and stands out among many other lures. The lure was patented back in 1905 in LaGrange, Indiana, by Charles Smith.

Less than a dozen of these lures are believed to exist today. Any lure collector would love to have this bait in their collection. It was recently sold in an auction held in 2015 for around $17,500.

Krantz & Smith Chautauqua Minnow – This lure is extremely rare and is also one of the most sought-after antique lures. Only a handful of these lures were made. This lure was advertised as the 1st weedless lure in America. It was produced by Krantz & Smith back in Jamestown, New York, 908.

The lure is quite pretty to look at, but it isn’t the best when it comes to catching fish. Hence, only a handful amount of these was made. The value of the lure is estimated to be about $12,000 today. I absolutely see it as an investment.

But you can always tap into your creativity and make your own unique lure. You can do it by getting the Getting Started In Custom Painted Crankbaits guide book. Who knows, you just might make the next rarest lure. 😉