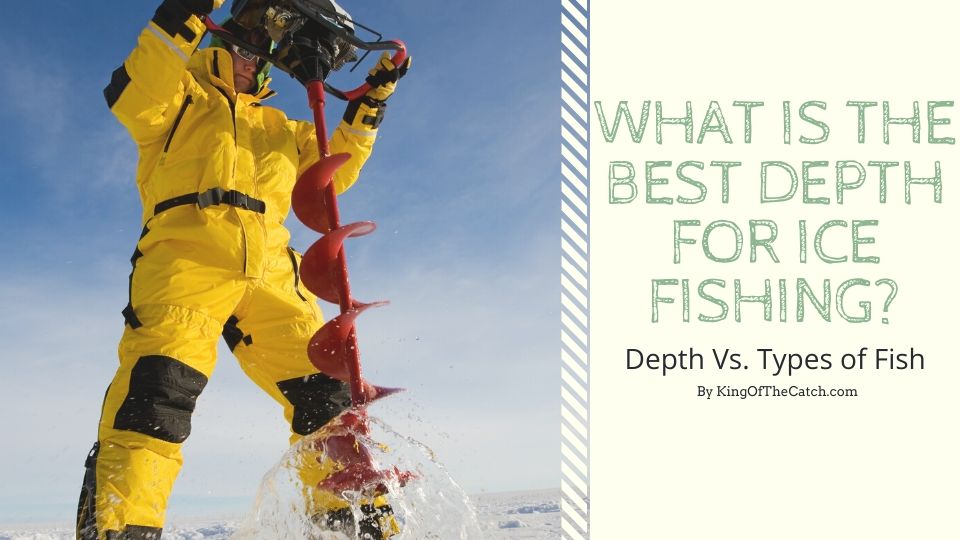 For the casuals out there, Ice fishing may look like a simple activity with nothing much to offer. However, ice fishing is more than just sitting on ice, waiting to catch some fish. There’s a lot that goes in it and can be seriously challenging at times. It’s hard enough to catch some fish during the spring and summer season, let alone fishing in the cold weather. But you also have to deal with a thick layer of ice. You have to learn a lot of tips and tricks if you want to catch a good amount of fish.

One of the tips and tricks in catching a good amount of fish is by knowing the perfect depth to ice fish. This might not seem like a big thing, but trust me, it can really affect your catch on ice.

Through my experience, one thing I’ve learned is that never underestimate the depth you fish in. Because it can either make or break your whole fishing trip.

What is the perfect depth to ice fish?

If you know even a little thing about fishing, then you must already know that all fishes do not swim at the same depth. Each species of fish have different habitat along with different oxygen and food requirement. And for that reason, you will find different kinds of fish at different depths of the water bodies.

With that in mind, I’ll try to list out the perfect or the best depth to find each kind of fish in the lake. However, it should be pointed out that fishes of the same species can differ from one lake to the other.

Crappies are one of the most sought after panfish by ice fishing enthusiasts. It provides a great treat during the cold winter seasons. The depth of finding crappie usually depends on the vegetation under the ice.

You will normally find crappies under 8 to 12 feet of water as long as there are enough living weeds.

But with the onset of winter, the level of oxygen in the water decreases, and sunlight alone no longer keeps the plants alive. And as such, crappies tend to suspend out. Locating them in this time of the year is extremely easy. You can find them with the help of some fish finders.

Some of my favorite fish finder tools are the Lowrance Hook2, Humminbird Helix 5 SI/GPS Combo, and finally, the Garmin Striker 4 plus.

Crappies usually move around a lot, so you’ll find yourself drilling a lot of holes in the ice. When the bites start decreasing, you’ll have to move on to the next nearby hole to start catching them once again.

If you want to have a lot of fun on your next ice fishing trip, then you might want to try and catch the yellow perch. They are easy to catch, and you will also enjoy catching them. Perch also happens to be very tasty. In fact, they are one of the tastiest fish you will catch.

Catching a perch can become very easy once you start using contour maps. You will mostly find them in transitional zones of the lake between shallow flatbeds and deeper flats. Drill holes in these locations and test them until you catch one.

It is important to remember that perch likes to swim near the bottom. So reel down your bait all the way to the bottom and pull it up for about afoot.

If you’re going out for ice fishing, you might want to go after walleye fishes. They are very popular among ice fishing enthusiasts. However, they are hard to catch for beginners. But if you find out the depths they swim in; you can easily catch a good amount of walleye.

In frozen lakes and streams, you will normally find walleyes from 18 to 25 feet under the ice. They tend to swim around reefs, weeds, drop-offs, and points.

In late-winter, walleye likes to go deeper into the water where it is warmer. Late-winter also brings some change in its priorities. They are more focused on pre-spawn activities, and you’ll find them in spawning zones, which are located at 15 feet.

Nothing brings a bigger smile on a fish anglers’ face than a northern pike. For any fishing enthusiast, winter is the best time to catch these big predators. The approach to catching a northern pike is very simple. When I’m trying to catch one, I prefer to use a tip-up rigged to live or dead bait. The bigger your bait is, the better since this fish can devour a bait that’s 12 inches long.

The best depths to catch these fishes are the ones that support vegetation. Most lakes can support the growth of weed at around 10 to 15 feet. Find those weed and drill a bunch of holes. Suspend your bait at half the total depth of the weed.

Pikes being a predatory fish, likes to swim in shallow waters for food. So if you’re lucky enough, you might even catch one at 5 feet deep. Just remember to be sneaky.

However, if you find out the perfect depths of all fishes and keep them in mind, you can easily increase the amount of catch. You will also have a lot of fun as well.